Rapper Lil Uzi Vert is a Philadelphia, Pennsylvania, United States born music sensation. Vert has marked his name not only as a rapper but also as a singer and songwriter. Uzi was born Symere Bysil Woods on July 31, 1995. As of 2021, he is 26-years-old. Besides his musical career, Uzi is famous for his tattoos. Also, facial piercings, eccentric hairstyles and androgynous fashion.

Uzi had a different kind of struggle, unlike other rappers. He dropped out of school and started working at a dollar store. Moreover, as a teen, he made some decisions that led him to a different path than education. As a result, his mother kicked him out of the house.

Growing up, Vert was highly inspired by Marilyn Manson. Similarly, he loved listening to Chris Brown, Mike Jones and Ying Yang Twins. Likewise, Vert was also a fan of Wiz Khalifa and Meek Mill, Paramore, Smash Mouth, and The Rocket Summer. Also, he used to listen to Simian, My Chemical Romance, and The All-American Rejects.

Currently, Lil Uzi Vert is dating rapper JT of the City Girls. Woods has also dedicated a tattoo on his left hand for her.

Woods was in a relationship with designer Brittany Byrd from 2014 to 2017. Brittany, a fashion designer, was trendy among Vert’s fans. Moreover, Symere mentioned Byrd in his songs, “Nuyork Nights at 21” from Luv Is Rage.

In the past, Vert has been accused of domestic violence and being a Satanist. However, the accusations are baseless, and he is not proven guilty. 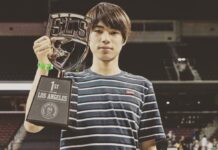 How Much Is Rapper Playboi Carti Worth? How Much He Makes A Year?