Emmanuel Acho is the former linebacker in the National Football League. Currently, Emmanuel serves Fox Sports 1 as an analyst. Not to forget, he also did for ESPN for a short time.

In addition to his athletic career, Acho has managed to bag the show Bachelor’s ‘After the Final Rose.’ He has replaced Chris Harrison on the show as a host. Also, he is the author of the book Uncomfortable Conversations with a Black Man. Furthermore, Emmanuel has a Youtube channel where he started a video series based on his book.

Although Acho is an outsider on The Bachelorette, he has already proven his worth on various platforms. Acho has managed to collect a huge fan following outside of the show. His self-titled Instagram has over 800k followers. In addition to that, his Youtube has multi-thousand of followers. Not to mention, he is on Twitter too.

Where are Emmanuel Acho’s parents from?

Acho was born in Dallas on November 10, 1990 (age 30) to Dr. Sonny and Christie Acho. His father, Dr. Sonny, is an Igbo person (south-central and southeastern Nigeria and Equatorial Guinea). Whereas his mother Christie is from Isuikwuato, Nigeria. Hence, Emmanuel belongs to an African ethnic group and holds an American nationality. Furthermore, Acho follows Christianity and his birth sign in Scorpio.

Who is Emmanuel Acho Dating?

In 2019, Emmanuel broke up with his girlfriend of one year Yvonne Orji. Yvonne is a Nigerian-American comedian and an actress who played Molly Carter on HBO’s “Insecure.” For now, Acho appears to be single.

How much money does Emmanuel make?

Acho is looking forward to focusing on his career even more than before. He has a bright career as an analyst and now as a TV host. According to stylecaster.com, as an Analyst, Emmanuel makes a $75,000 salary per annum. Furthermore, he earned $1,227,097 during his tenure on the New York Giants, the Cleveland Browns, and the Philadelphia Eagles.
Based on his works, Acho has an estimated net worth of around $1-$3 million.

How tall is Emmanuel Acho? 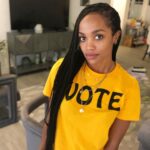