Who is Addison Agen?

Addison Agen is a Caucasian ethnic American singer-songwriter. Addison is also known for Season 13’s first runner-up on NBC’s The Voice. Based in Fort Wayne, Indiana, Agen was born on March 31, 2001. Her father is Morrison Agen whereas her mother is Kristine Agen. What’s more, she is the elder sister to her younger brother Korrigan Agen.

Addison grew up listening to her mother, Kristine, who works at nursing homes as a musical therapist. Following her mother’s footsteps, Addison started singing at the age of four. Also, she was already writing her songs at the age of eleven. Lastly, she went to Concordia Lutheran High School.

Addison is in a relationship with Mike Gronsky. Her Boyfriend Mike is a guitarist and a songwriter. The duo shares cute pictures with deep captions on their Instagram.

Additionally, Agen shared a photo of their well-spent Valentines Day and captioned it; This boy makes me laugh SO MUCH! To the one that has the most smiley-est eyes in the world (last pic), the one who adventures with me and does stupid things (2nd to last – ps my eye is okay), and the one who loves people so well! Thank’s for being my valentine 🤗

Notably, Addison released her first album when she was just 15. Her album New Places includes Sugarcoat, Start Over, Both of Us, Look, Torn, etc. Then, she auditioned for the 13th season of a reality TV show, The Voice. With her talent, she joined team Adam and made it as a first runner up.

Furthermore, Her finale performances were so astonishing that they helped her reach the iTunes top 10. Last but not least, Addison released all of her performances from The Voice, which included 13 songs. As an American singer, Addison has earned some coinage from her songs and performances. Not only worth, but she has also accumulated thousand of followers.

According to sources, Addison Agen has approximately around $1-$5 million net worth.

How Much Is Rapper Playboi Carti Worth? How Much He Makes A Year? 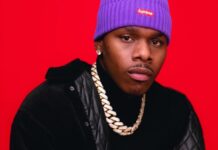 How Tall is Rapper DaBaby? Learn about His Net Worth, & Married Life